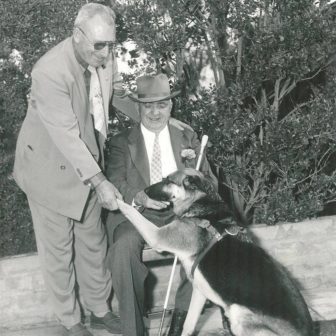 Guide Dogs of America was founded over 70 years ago by Joseph Jones, Sr. with the help of the International Association of Machinists and Aerospace Workers
(IAMAW).

Joseph Jones, Sr., shown in the picture to the right with his guide dog Lucy, was a retired member of the IAMAW.

When Mr. Jones became blind, he considered all his options and decided his mobility needs would best be met by using a guide dog. He applied to all the existing schools, but he was declined because of his “advanced age.” He was only 57 years old.

Mr. Jones was a determined man and “no” was not a word in his vocabulary. He turned to the IAMAW for help, soliciting assistance from its Executive Council. The IAMAW Executive Council conducted extensive research, determined there was a growing need for guide dog services, and therefore endorsed the founding of International Guiding Eyes in 1948. The IAMAW continues to be a generous supporter of the school’s mission today. International Guiding Eyes was one of the first guide dog schools to be founded by a blind individual. It was also one of the first schools to adopt a policy of no upper age discrimination.

In 1992, International Guiding Eyes changed its “doing-business-as” name to Guide Dogs of America in an effort to communicate more clearly the services provided by the organization. Since its founding over 70 years ago, International Guiding Eyes, Inc., dba Guide Dogs of America has matched thousands of blind and visually impaired men and women with extraordinary guide dog partners and continues to seek new and better ways of to support the blind community.