a motto that resonates strongly with retired USMC 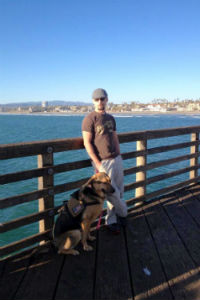 Sergeant Jesse James. Jesse received his At Ease Service Dog, Jag, in 2012, around the time he was medically disciharged from the Marine Corps. Jesse suffers from post-traumatic stress disorder from his service in Afghanistan supporting Operation Enduring Freedom. Jesse’s symptoms of PTSD included hyper vigilance in crowded places, which inhibited him from going into public as well as sleep problems, which affected his overall well being. By performing cues that help mitigate his symptoms of PTSD, Jag assists Jesse to live a more independent life, benefiting not only Jesse, but also his entire family. When asked about the role Jag plays in his life today, Jesse states

“Jag is always by my side and looking out for me. We’ve grown so close together and the way se moves alerts me if someone is near the house or if someone is coming up. 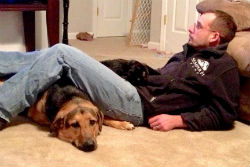 I do’t think I could sleep at all without knowing she is right there and able to alert me if something happens. She always looks out for me and knows when I need her.”

Jag continues to play an important role in Jesse’s healing journey, helping him to create the future he is fighting for.