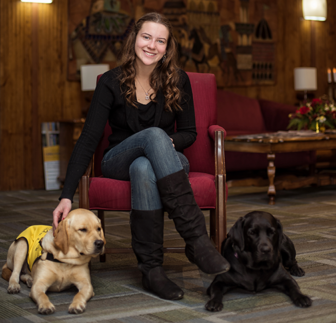 My goal was unique – I wanted to be a Guide Dogs of America puppy raiser!

If you ask the average 7 year old what they want to be when they grow up you’ll probably get a variety of answers. Some kids want to be astronauts and go to space, others want to be doctors and save lives. My goal was unique – I wanted to be a Guide Dogs of America puppy raiser!

I was first introduced to GDA, guide dogs, and puppy raisers at the annual Girl Scout Cookie Kick Off when I was 7 years old. My fellow scouts went from booth to booth building cookie towers and sampling that year’s new cookies. Meanwhile I cuddled with an adorable black lab. By the time my mom caught up with me I had learned all about being a puppy raiser. I begged her to let me raise a puppy. Not wanting to disappoint me, she said “Sure, but not right now.” Instead of forgetting her denial like I am sure she hoped, I asked her that same question every day for almost seven years. Her response never changed. Finally, just before my freshman year of high school, I asked my mom again. This time instead of doing so at home I waited until I was helping her in her third grade class. When she asked her students a question and no one answered, I raised my hand. She thought I’d give her the correct answer, but I asked her that same question again…”Can I raise a guide dog puppy?” She was so irritated that she said “Sure!” and moved on with the rest of her lesson.

By the time the school day was over I had submitted a puppy raiser application to GDA. You should have seen the look on her face when she got a phone call from our group leader Pam asking to schedule our home interview! She finally agreed to the home interview thinking I would change my mind after learning more about the responsibilities of a puppy raiser. Pam came out with her pup Shelby. By the time she left I was online buying toys for our future pup.

I spent months convincing my school district to let me bring a puppy to school.

It took a few months for us to get everything in place. I spent months convincing my school district to let me bring a puppy to school. When they finally agreed, they only agreed to let me bring the puppy two days a week. My parents were supportive and agreed to look after the puppy when I couldn’t. Once everything was in place, we reached out to Louise and told her we were finally ready.

A few days later we found out we’d be bringing home a female black Labrador from the “C” litter! That night we spent hours trying to come up with names – we probably had a list of 50. We narrowed it down to 2, Chloe and Chalet, and a few weeks later we brought home our wiggly, happy little bundle of energy…Chloe. Chloe was a joy to raise, she was smart and confident. She went to class with me, took the bus to golf matches, swim meets, and water polo games. She instantly became the most popular girl on campus.

Fifteen months later we got our turn in letter. My heart shattered – I had fallen so in love with Chloe and definitely did not want to give her up. After a few days of non-stop tears I asked my mom the question I don’t think she really wanted to hear, “So, can we raise ANOTHER guide dog puppy?” A few weeks later we brought home puppy number two, a black Labrador named Palani.

The minute I saw Chloe and her handler together I knew she was exactly where she was meant to be.

Turning Chloe in was devastating. I had known it was coming from the day we picked out her name, but knowing it was coming didn’t make it any easier. I stared at my phone for days, convinced that GDA would call me to tell me Chloe was ready to come home. That call never came. Five months after turning Chloe in, she was matched with a woman in Los Angeles – truly her perfect partner. The minute I saw Chloe and her handler together I knew she was exactly where she was meant to be.

People ask me how I can give up a puppy I’ve had at my side for over a year. After seeing Chloe with her partner I realized just how special these dogs are. It’s harder to get a call saying the puppy you fostered has been “career changed,” than it is to get the call that they’ve been matched. Knowing the purpose each puppy serves, how could I NOT give the puppy up?

Raising for GDA ended up being a much bigger part of my life than I could have ever anticipated. I am now a junior at LMU and am finishing my psychology degree. I am hoping to follow that with a master’s in orientation and mobility, (teaching the blind and visually impaired how to navigate). I can guarantee you that had I not come across GDA as a young Girl Scout, I would be in a very different place!

We are now on our fifth puppy Jenny, who is ready to begin formal training on October 27th…and yes there is a little one waiting for us in the nursery. We are looking forward to bringing home a new trainee at the beginning of November. My family may have expected to raise just one puppy, but seven years later they are just as excited to bring home puppy number six as I am!